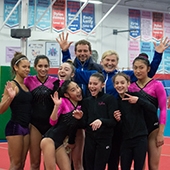 Rauza began coaching at JAG in 2004 as a USAG Team Coach, however, her gymnastics career began well before that. In 1975, Rauza worked for the Department of Sports Gymnastics of the Uzbek State Institute of Physical Training and Sports.  In 1981 she completed her training and was awarded the qualification of Coach and Teacher. Under her guidance, Rozaliya Galieva was granted a spot on the Soviet Union’s National Team that competed at the 1992 Olympic Games in Barcelona, Spain. In 1994, Rauza took the position of Senior Coach and Advisor of the Argentine National Team, leading them to many successes including a Bronze medal in the 1995 Pan American Games Team Competition and Silver Medals at the 1991 Pan American Games and the 2002 Sub-American Games. In addition, Rauza has received many coaching honors including “Honored Coach of Uzbekistan” and “Honored Coach of the USSR.”