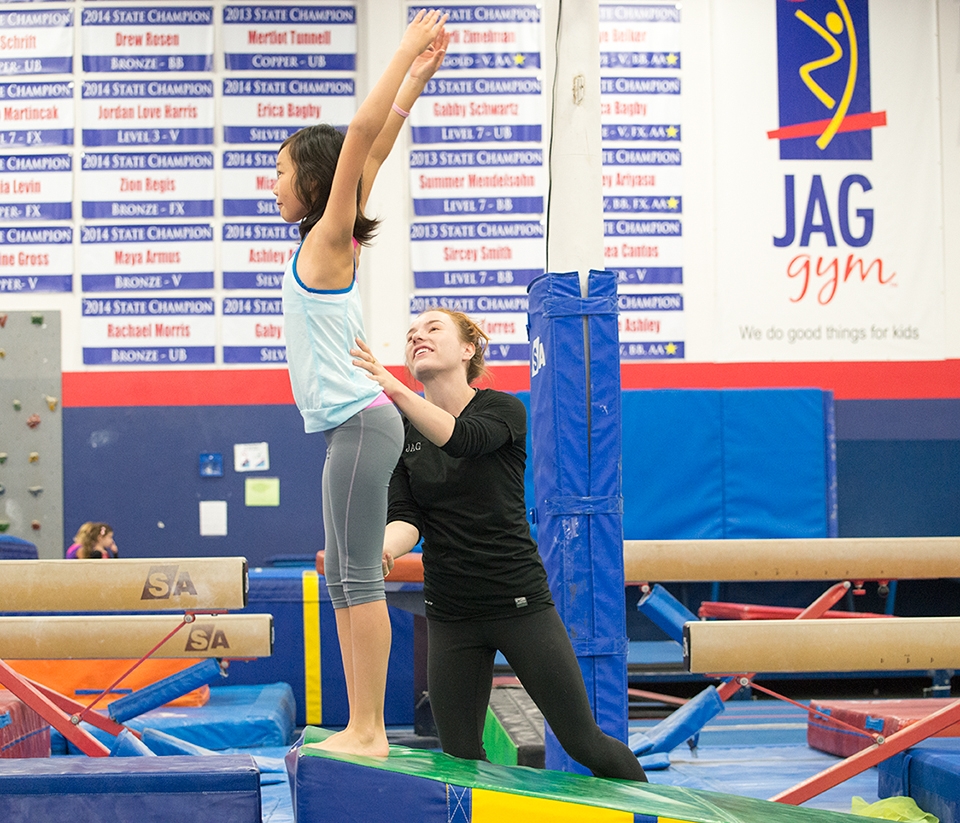 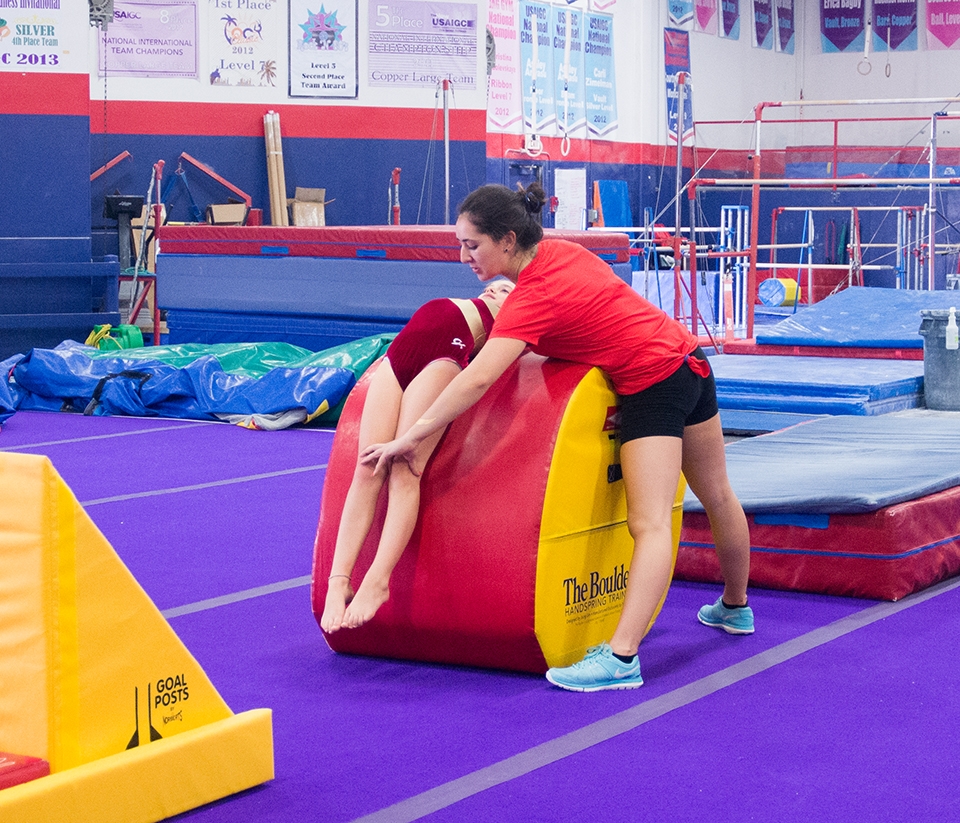 Private instruction can be a wonderful supplement to organized group training. The goal of private lessons should be to enforce specific skills or help gain confidence in a one-on-one setting.  This is especially true for competitive athletes.  In order to maximize the benefit and potential offered by private instruction, private lessons at JAG are limited to a maximum of no more than 2 students.

Private lessons are available on Sundays by appointment only. Payments and scheduling are handled through the front desk. Due to the limited availability of private lesson slots in our schedule, cancellations are not permitted, as scheduled private lessons are non-refundable. Private instruction is a supplement to training, so students MUST be currently enrolled in classes at JAG to be eligible for private lessons.

Instructors listed below are the only JAG Gym staff permitted to do private lessons. For a list of available dates/times and to schedule a private lesson please visit our parent portal or contact a coach directly through their email link below. You can also schedule a private by sending an email to privatelessons@jaggym.com or calling our front office at 310-287-9886.

Anna’s passion for gymnastics began at the age of 4. Nothing else from t-ball to ballet had quite fit her rambunctious spirit and high energy. Her parents knew right away that this sport was for her before she even finished her first class. She continued to train until the age of 12 at her local gym Sports Section Gymnastics in Oakdale, CA where she was born and raised. Her desire to experience new things led her to competitive figure skating, dance, and cheerleading between the ages of 12-18. After graduating high school she was eager to leave her small town in Northern California and was off to college at Orange Coast in Costa Mesa, CA. She eventually made her way to Los Angeles where she completed her RYS 200 hour Yoga Alliance teacher training program and is a certified yoga instructor. Then she found JAG! Through coaching here she has rediscovered her love for gymnastics and believes it’s something that truly never left her. She currently coaches recreational and team students. It is her greatest joy to see a child grow within the sport physically and mentally.

Dianna has been coaching since 2000 and has regularly attended gymnastics education clinics from leaders in the industry throughout the years. She is CPR and first aid certified through the American Red Cross, as well  as, safety certified through USA Gymnastics. She has experience with coaching pre-school, competitive gymnastics and everything in between. She is originally from Michigan where she grew up taking dance classes and was a competitive gymnast.

Dianna loves to joke and have fun with the kids. She is passionate about guiding them to discover their courage and determination from within to triumph in endeavors as big as they can dream!

When Dianna is not in the gym, she enjoys a good non fiction book, listening to Rock n' Roll and swimming! She is part mermaid.

Cari’s path to JAG began at a young age, with ten years of gymnastics experience and 6 years as a Junior Olympic diver. She also has a background in professional swing dancing, and has danced in various films, music videos, and even for President Clinton at the Democratic Convention in San Francisco. Cari began coaching in Region One Northern California in 1991, and later brought her experience to JAG in November of 2009.  Cari holds a BS degree in Kinesiology with an emphasis in teaching K-12 from San Jose State University. She also retains her certification as a meet director, USAG safety certification, as well as first aid and CPR from the American Red Cross. Cari is continually committed to the sport of gymnastics, the sport she feels is the most amazing and exciting sport in the world.

Ruby was born and raised in Los Angeles, CA. At the age of 4, she started training in Rhythmic Gymnastics in which she competed until age 18. Ruby has an AA in Early Childhood Education and enjoys working with preschool-aged children. When not at the gym she enjoys skateboarding and painting!

Tenaya has been passionate about the sport of gymnastics since she started  taking lessons as a child. She has been coaching gymnastics since 2008 and worked at Flip Fest Gymnastics Camp in Tennessee alongside Olympians like Nastia Liukin, Svetlana Boguinskaia, and camp owners, John Macready and John Roethlisberger for 5 summers. During her time at the camp, she attended coaching clinics and learned from some of the top collegiate coaches in the country. She has coached girls and boys, team and class, USAG levels 1-10, and worked briefly with Elite gymnasts. She loves working with kids and helping them learn new skills and overcome mental blocks.

Tenaya has lived all over the country; born in Alaska, then moving to California and Georgia. She holds a Bachelor of Science in Psychology from the University of Georgia, memberships from USA Gymnastics and AAU Gymnastics, and is Safety and Risk Management Certified. When not in the gym, Tenaya enjoys spending time outdoors, hiking, and relaxing at the beach. She also loves to read and paint whenever she has the time and can usually be found with a cup of coffee in her hand!

Janelle Molin joined the JAG family in 2016 but has nearly seven years of coaching experience under her belt. While her main experience involves coaching recreational classes for ages 2-12, she is excited to expand her knowledge to teaching higher level gymnasts. She is a recent graduate of Woodbury University and has a Bachelor's degree in Marketing. She hopes to bring her experience and education to help make JAG the best program for students and their families. When she is not in the gym, she enjoys surfing, rollerblading, and taking naps.

Janae started gymnastics at the age of 6. She competed for 12 years earning quite a few State, Regional and National titles. Janae was on JAG's competitive team as a level 10 for 4 years before earning a gymnastics scholarship to Temple University in 2008. While in college, Janae took up coaching gymnastics clinics and has been coaching ever since. For 8 years she has taught parent child to competitive gymnastics and everything in between. Janae also holds her USA Gymnastics safety certification. While not at JAG, Janae likes to spend her time shopping with her daughter.

Rauza began coaching at JAG in 2004 as a USAG Team Coach, however, her gymnastics career began well before that. In 1975, Rauza worked for the Department of Sports Gymnastics of the Uzbek State Institute of Physical Training and Sports.  In 1981 she completed her training and was awarded the qualification of Coach and Teacher. Under her guidance, Rozaliya Galieva was granted a spot on the Soviet Union’s National Team that competed at the 1992 Olympic Games in Barcelona, Spain. In 1994, Rauza took the position of Senior Coach and Advisor of the Argentine National Team, leading them to many successes including a Bronze medal in the 1995 Pan American Games Team Competition and Silver Medals at the 1991 Pan American Games and the 2002 Sub-American Games. In addition, Rauza has received many coaching honors including “Honored Coach of Uzbekistan” and “Honored Coach of the USSR.”

Originally from Chile, Ita has coached gymnastics for over 25 years. She holds a BA in Physical Education from Catholic University Chile where she also served as a teaching assistant. Ita has participated in gymnastics since the age of 6, and has coached girls from beginner to competitive levels. She finds great joy in the athletes learning new skills.